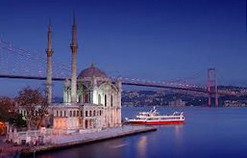 An invitation came in 1991 to direct a very low budget TV movie in Istanbul. Working with foreign film crews is never more enjoyable than when shooting an action drama. Bedel (Ransom) is a sixty-minute film starring one of Turkey’s leading actors. The locations alone were outstanding, but the intense entrapment of a blood feud sent a strong message about the futility of revenge. This was my first experience directing a full-length drama and of course, it was in Turkish!

Film practice in Turkey back then was a little unusual. It was normal for the script supervisor to read the actors lines while shooting and the actor would then do an improv. The quality is not great by today's standards because it was shot on Hi8! In spite of that, the 60 minute film has been dubbed into more than 20 languages and is quite well known throughout the Middle East. Some clips were already on YouTube so I just linked to one here.