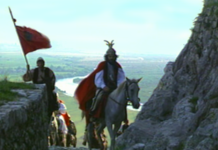 Kidnapped by the Ottoman Turks at a young age, Albanian freedom fighter Gjergj Kastrioti-Skanderbeg was raised under Islam and trained as a general within the ranks of the Turkish military. He was appointed as the governor of the Sanjak of Dibra by the Ottoman Turks in 1440﻿. ﻿﻿Turning against his country's invaders, Skanderbeg returned to his Christian roots in 1443. As commander of Albania's warlords, he sparked a national revolt in 1444 and held off numerous efforts by the Ottomans to take back Albania and bring that country once again under Muslim rule. Following Kastrioti-Skanderbeg's death in 1468 his Albanian forces could no longer repulse the Turks; twelve years later Albania fell once more to Turkish forces and remained part of the Ottoman Empire for many centuries, until its eventual liberation in 1912.﻿

I've pieced together some segments here from the TV Special "Roots" which I directed in 1996 which included the Skanderbeg segment. The entire production was filmed on location in Albania with Albanian actors. Timo Flloko gave some outstanding performances as Skanderbeg. I only wish we'd had better help with costumes and make up... ughh, that beard!